Basketball has been a lifelong love of mine. I started playing when I was in the fifth grade. Soon after, I was shooting hoops in my driveway after school nearly every single day. I continued playing in junior high and high school. My career ended there, though I once made a half-court shot at a professional game and won a car.

Throughout my life, whenever I’ve needed time to relax or think, I find a basket and start to shoot. It’s a source of comfort. Time seems to float on when I play.

I left Worlds of Wonder, a startup toy company, in the late 80s because I wanted to start a new venture. In our new home in Modesto, Calif., my wife and I converted our spare bedroom into my office. Armed with a large sketchpad, crayons and a few business cards, I set out to create new products that consumers would want. I scribbled down my ideas with excitement, looking for inspiration wherever I could find it.

Some days I headed to the park. Other days I drove to the mall or simply around town. Eventually, I realized my office itself was lacking in stimulation. So I stopped by Toys “R” Us and picked up an indoor Nerf basketball game made by Ohio Art. I started shooting hoops, which brought me back in time.

A few weeks later, I realized the backboard I had been staring at in my office was boring. It was square, white and had the tiniest of images of Michael Jordan on it. It doesn’t have to be that way, I thought. When I visited Hallmark that day (at the time, I was designing novelty gifts), I picked up a poster of Michael Jordan on my way out. When I got home, I started thinking about what I could do to make the game more interesting. 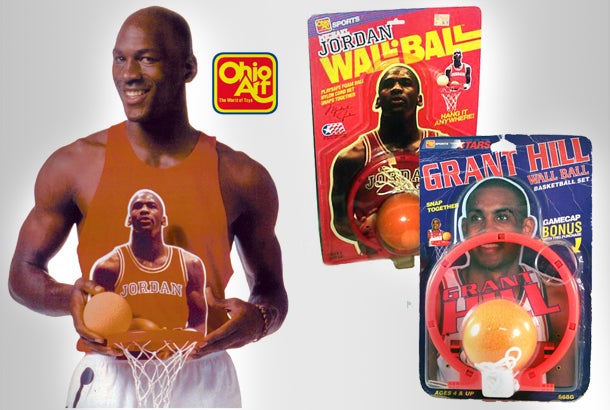 Did the backboard have to be square? I began playing one of my favorite games, Mix and Match, to try out new concepts. Eventually, I took the poster of Michael Jordan and taped it to the backboard. Now when I took a shot, I was staring into the eyes of my favorite player, his arms outstretched. I loved it!

When my wife got home that night, I excitedly told her about my new idea. She was unimpressed. In fact, she told me the likelihood of me licensing it was about one in a million. I decided to ignore her. The very next day, I took a photo of my prototype (in black and white, no less) and wrote some copy. “Play one on one with Michael Jordan!” I typed up. I named my product “Hoop Hoop Hooray.” It was not my best sell sheet — but it was enough.

I called Ohio Art to ask if they looked at outside submissions, and sure enough, they did. The toy industry has been working with freelancers for many years now. The woman I spoke with on the phone told me to address my submission to the head of new product submissions. Less than a week after mailing the company my materials, I received a contract in the mail for a licensing agreement. I nearly fell out of my chair. I couldn’t believe it!

Ohio Art wanted to pay me 3 percent for each Michael Jordan Wall-Ball they sold. The lower royalty rate, he explained, was because Michael Jordan would also have to be paid a royalty. I looked over the agreement, made a few comments and signed it soon thereafter.

Did I have any intellectual property? No. Some industries just don’t care. Ohio Art already had the rights to produce Michael Jordan’s image on indoor basketball games. That was enough for them. I had shown them a way to better leverage their license, and they were willing to pay me for it.

I can very clearly remember sitting with Janice and our three kids one Saturday morning watching cartoons when a commercial for the Michael Jordan Wall-Ball came on. Jordan says, “Best backboard I’ve ever seen!” I looked over at Janice and smiled. To be honest, I was as surprised as she. My simple idea had made it on TV.

Ohio Art produced Wall-Balls with images of Penny Hardaway and Grant Hill as well. They also made miniature ones that they put in cereal boxes as free gifts. All in all, my simple idea sold for more than 10 years. The last royalty check I received was for 35 cents. I kept it, of course.

The moral of this story is that simple ideas are powerful. You don’t need to reinvent the wheel to come up with a lucrative idea. In fact, you’re much better off coming up with small improvements to existing ideas. At the end of the day, know that the only opinion that matters when it comes to the marketability of your idea is the company you submit it to — your potential licensee. My wife is the smartest person I know. But even she couldn’t see the writing on the wall.

Needless to say, shooting hoops brings me as much joy today as it did then.

Article courtesy of Entrepreneur.com, first published on May 15, 2015, under the title “Inventing a Small Improvement to an Existing Idea Is All It Takes.” Link to original publication: https://www.entrepreneur.com/article/246260.

Why You Need to Make Prototypes